The NYS Senate has been consistently controlled by the Republican Party since World War II with the exception of two brief periods (first in 1965 and second in 2008-2009). Since 2011, the Independent Democratic Conference (IDC) has had a power sharing agreement with the Republican Conference along with Senator Simcha Felder, a Democrat, who has always conferenced with the Republicans. On April 4, 2018, Governor Cuomo, under pressure from progressive groups, announced (with Senator Jeff Klein, the Leader of the IDC and Senator Andrea Stewart-Cousins, Leader of the Democratic Conference) the reunification of the IDC with the mainstream Democratic Conference. Senate Democrats had hoped that the April 24th Special Election wins of two Democrats, Senate District 37 – Shelley Mayer and Bronx Senate District 32 – Luis Sepulveda, would provide them with the Senate Majority. However, Senator Simcha Felder has chosen to stay with the Republicans, maintaining their Majority through the end of this session, saying that changing the seat of power so close to the end of session would cause chaos and hurt his constituents and all New Yorkers.

Every elected position in Albany (Governor, Comptroller, Attorney General, 150 Assembly seats and 63 state Senate seats), all 27 NY Congressional seats and Senator Gillibrand will all be on the ballot in November and many are speculating about how the general election will affect the balance of power in Albany as well as in Washington D.C.

In light of the IDC re-joining the mainline Democrats, there is particular attention on the NYS Senate outcome in November. The following Republican NYS Senators have announced that they will not seek re-election in November for various reasons from age (Senator Larkin is 90), military deployment (Senator Croci) and family obligations:

There is also much attention to the Governor’s race with former Sex and the City actress Cynthia Nixon challenging Governor Cuomo for the Democratic line as not being a progressive, and a long list of Attorney General candidates with the sudden May 7, 2018 resignation of Eric Schneiderman after accusations of abusive behavior towards several women he dated. Schneiderman was re-elected in 2014 with 56% of the vote and had been seen as unbeatable. As a result, there are a number of primaries and elections that will be very competitive.

The COPA legislative team – Barbara Crosier of CP of NYS, JR Drexelius of DDAWNY, and Wini Schiff of IAC – started a weekly legislative briefing call beginning March 26. These weekly Monday morning calls at 11:00 am will run through the end of the NYS Legislative Session in June. When the Legislative Session is over, the calls will be continued on a monthly basis or more often as needed.

Join your COPA team and colleagues from across New York State to hear the latest government and legislative scoop and ask the experts your questions!

New York State Senator Rob Ortt has introduced legislation aimed at addressing the salaries and benefits of direct care workers employed by mental hygiene not-for-profits operating under the state. A lack of competitive wages, due to inadequate funding by the state, has created a crisis for these not-for-profit providers facing massive shortages in the field of direct support professionals. In New York, one in seven direct support professional jobs remain vacant and staffing turnover rates have risen to more than 27 percent.

“Direct support professionals are tasked with the exceedingly difficult job of looking after some of the most vulnerable members of our communities,” said Senator Ortt. “Not only are these workers forced to work long hours, often logging massive amounts of overtime, but they are continually underpaid for the vital services they provide. My legislation would ensure that the direct support professionals of our state are paid the fair and living wage they not only deserve, but were promised.”

While over the last two years, these support workers have received a 3.25 percent raise in pay, there is no legislation in place to continue the state’s pledge to fairly compensate these professionals. Senator Ortt’s legislation would continue the state’s commitment by providing a 3.25 percent increase to salaries and benefits for direct care workers for an additional four years.

“It’s about having our priorities straight,” said Senator Ortt. “There is no reason that an individual working at a fast food restaurant should be making more than direct support professionals serving the not-for-profits do in our state.”

Susan Constantino, President & CEO of Cerebral Palsy Associations of New York State, said, “We are extremely pleased that Senator Ortt continues to be a leader in our efforts to work with the New York State Legislature and the Governor to raise the pay for our direct support professionals closer to a living wage. The Senate bill he has introduced will move us one step closer to the goal of the #bFair2DirectCare campaign to address the workforce crisis in our field,” said Ms. Constantino. “We thank Senator Ortt for his leadership on this critical issue, and urge the other members of the Senate and Assembly to support this legislation and #bFair2DirectCare.”

#bFair2DirectCare is a call to action to remind state leaders that the nearly 100,000 direct support professionals who work for not-for-profit agencies do this work on behalf of the state. These professionals need and deserve a living wage for the work they do.  Without this commitment from the state, our system of caring for people with developmental disabilities risks collapse as direct care workers seek better wages in fast food restaurants and big box stores. In most cases, more than 90% of the funding for these agencies comes from government, at rates set by the government. For more on this issue please visit: www.bfair2DirectCare.com.

The 11th Annual Quality and Compliance Conference was held Tuesday, May 8th, at the Saratoga Hilton Hotel in Saratoga Springs. More than 200 people attended the event. The conference was presented by CP of NYS and The Arc NY (formerly NYSARC, Inc.) and consisted of four sessions with the latest information presented by top professionals in the field.

Denise M Miranda, Esq., Executive Director of the Justice Center for the Protection for People with Special Needs, presented the keynote presentation with updates on the Justice Center.  She then answered questions from the audience. 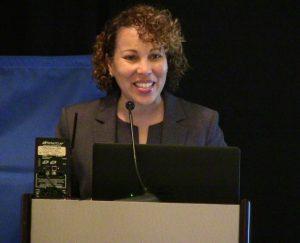 To view PowerPoint presentations from the 2018 Corporate Compliance Conference, please visit our website.

2018 AUTISM ACTION DAY AT THE CAPITOL

On April 18th at the NYS Capitol the 2018 Autism Action Day, sponsored by Assembly member Angelo Santabarbara, took place. This day is an opportunity to join with organizations, advocates and families who work to help the autism community across the state of New York.

Courtney Burke, who is the Chairwoman of the New York State Autism Spectrum Disorders Advisory Board, spoke about the upcoming work being done by the new board. 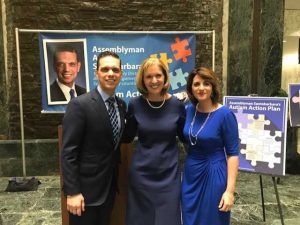 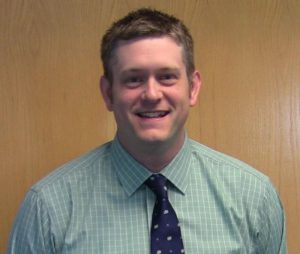 Tim Ferguson of Albany has joined CP of NYS Affiliate Services as Director of Special Projects and Online Learning.  He will continue to develop web-based learning tools for CP of NYS and its Affiliates as well as coordinate with CP of NYS and Affiliate staff on special projects, including the Centers of Excellence in the Care and Treatment of Children with Autism Spectrum Disorders and Other Complex Disabilities project.

Mr. Ferguson comes to the Affiliate Services Office after serving as an assignment manager and web editor at WTEN/WXXA TV, the ABC/FOX Affiliate in Albany. Previously, Mr. Ferguson spent eight years as a middle school and high school teacher and academic advisor at school districts in central New York and the Capital District. He has both a Bachelor’s Degree and a Master’s Degree from the University at Albany as well as a Master’s Degree from the S.I. Newhouse School of Public Communications at Syracuse University.

CHANGE AT THE TOP

After nearly four decades heading up Upstate Cerebral Palsy, Louis B. Tehan is handing over the responsibility of leading the CP of NYS Affiliate to Geno DeCondo, who has been with the organization for the past ten years. Mr. Tehan will devote his time to the Parent Corporation – Upstate Caring Partners, Inc., which has eleven affiliates and serves 39,000 people with over 3,000 staff and has an annual operating budget of over $200,000,000. 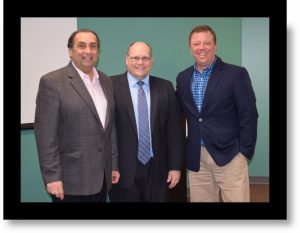 “I absolutely love this place, the energy and enthusiasm that is so obvious in every facet of our great agency,” said Mr. Tehan. “I am pleased and encouraged to announce that the Board of Directors has approved Geno DeCondo as the Upstate Cerebral Palsy Executive Director, effective May 1, 2018. For me it’s not goodbye, but more appropriately, Thank You….for the privilege and opportunity to be, in some way, a part of your lives.”

The annual ADAPT Family Connect Summit was held on Thursday, April 26th at the New York Academy of Medicine. Approximately 600 families, advocates and vendors learned about the latest information, changes and developments in the disability field.

This year’s plenary session, led by Edward R. Matthews, CEO, ADAPT Community Network, and Arthur Webb, Sr. Counselor on Health and Human Services, Capalino & Company, was attended by over 500 guests. The topic of this session was Achieving Conflict-Free Case Management in New York State and the Transition to Managed Care. “Managed Care is coming and it will not hurt you. It doesn’t mean less care – it’s simply how you manage it,” said Mr. Matthews, who opened the plenary discussion. He also provided an overview of the current services in New York State, the costs associated with them and how they are becoming unsustainable.

Arthur Webb, a renowned consultant with decades of experience in the disability field, has advised many state governmental organizations and nonprofits around the country that are currently moving to the managed care system. “There’s a demand to get more value out of our public dollars. We need to demonstrate that the eight billion dollar system has outcomes we can measure. I believe that we will get more value out of the money spent by embracing managed care,” said Mr. Webb.

The panelists also shed light on the upcoming July 1 deadline when Conflict Free Case Management becomes effective in New York State. There will be seven care coordination organizations that will employ more than 3,000 service coordinators to accommodate over 100,000 people with disabilities in New York State.

Later this fall, DOH will host a Social Determinates of Health Innovation Summit that will allow the applications with the best solutions to be able to pitch their product/idea to a panel of expert judges and audience members. Winners of each category will be honored with a 2018 SDH Health Innovation Award.

With no funding from the State for this initiative, it is a chance for innovation companies and organizations to receive exposure.

Innovations are due by June 15, 2018 at 5:00 p.m. The application is now available HERE. Questions can be emailed to SDH@health.ny.gov. 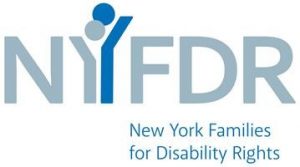 New York Families For Disability Rights was created to provide families of people with developmental disabilities a place to connect with others across the state. Here you will find information and tools to help you make informed decisions about how best to advocate for your loved one’s rights as well as for broader disability rights.

This website offers resources, facts and information about the service system and your rights, insights on how to get what you need and videos with practical advice from family members about the supports and services available in New York State. It is also a way to connect and interact with other families of people with disabilities for information and support. We have also provided advocacy tools on the site. Through the information available on this site you will become better informed and in the process, a stronger advocate for you and your family. Visit the site for offerings and additional information.

SAVE THE DATE – 2018 ANNUAL CONFERENCE