The U. S. House of Representatives passed a Tax Reform Bill before they left for the Thanksgiving break and the full Senate will vote very soon on their Tax Cuts and Jobs Act, which has already passed out of the Finance Committee, in an attempt to overhaul the federal tax code.

New York’s Senators Charles Schumer and Kirsten Gillibrand are fighting against Senate tax proposals that would harm people with disabilities, families, Medicaid, etc.  All the House Democrats along with five NY House Republicans voted NO on the tax bill.

CP of NYS is an ANCOR member and while neither have a position on tax reform, we have key positions on how tax reform may impact our services. Given these principles and a Senate tax reform vote expected this week, we believe it is important to speak up about the importance of Medicaid to people with I/DD before the Senate votes on this legislation.

Please contact your Congress members TODAY and tell them that you cannot support the legislation in its current form because:

Click HERE and contact your NY House member and let them know what their vote (NO or YES) means to people with disabilities, families, staff and volunteers in New York State.

Faced with a worsening staffing crisis and increased competition from both commercial businesses and the state government, #bFair2DirectCare is urging Governor Cuomo and state lawmakers to speed up implementation of funding that would provide a living wage to nonprofit workers who care for New Yorkers with disabilities.

#bFair2DirectCare is a powerful voice for 130,000 New Yorkers with developmental disabilities, their families and the not-for-profit organizations that support them. The campaign is also a call to action to remind state leaders that the nearly 100,000 DSPs who work for not-for-profit agencies do this work on behalf of the state.

Keep up with what is going on with the campaign and plans for events across the state to support the effort by visiting the new website at http://www.bfair2directcare.com/#home.

DiNapoli estimates that tax collections will lag $1.85 billion behind the latest projections by the Cuomo Administration’s Division of the Budget.  DiNapoli’s office says the shortfall is prompted by depressed income tax collections.

The Cuomo Administration’s latest deficit estimate for next year’s budget is $4.08 billion. Cuomo’s Administration proposes to cover $3.24 billion of the deficit with unspecified cuts by restraining the growth of operating spending to 2% or less. As has been the case the past several years, the Governor will likely require OPWDD and most every agency budget except for school aid and DOH Medicaid to submit budgets with 0% increases over the previous year.

I M A G I N E, the 57th CP of NYS Annual Conference attracted nearly 700 people from across the state for educational workshops and meetings at the Saratoga Hilton Hotel in Saratoga Springs, October 30-November 1. The schedule included sessions conducted by an all-star collection of nationally known presenters discussing the latest information important to people with disabilities, their families and people who support them.

Highlights of the Conference included the following:

Mr. Ebeling is the CEO of Not Impossible Labs, an organization that develops creative solutions to address real-world problems and was founded on his belief that nothing is impossible. He offered stories about the success of several projects undertaken by his organization to support that belief. He says his philosophy is simple: recognize a problem, commit to solving it, and then figure out how. 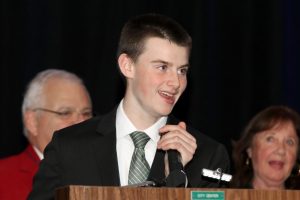 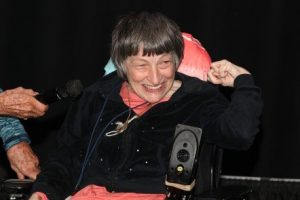 Jane Gefell, from CP Rochester, was the recipient of the Al Felmet Achievement Award.

As we all know, without our staff we would not be able to do all the outstanding work CP does in support of people with disabilities across New York – this group represents the very best of the best.  To the 2017 IMAGINE NATION, we simply say congratulations and THANK YOU.

For more on the CP of NYS Annual Conference, visit the conference web page HERE.

The CP of NYS Annual Conference was sponsored in part by the Irwin Siegel Agency, Sutton Land Services, LLC, and BDO.

She would probably not like being called an icon, but if the term fits anyone in our field, it fits Natalie Katz Rogers. On November 14 more than 75 people from Queens and across the state gathered at a banquet facility in Queens to honor and thank her for more than 60 years of service to Queens Centers for Progress (QCP) and Cerebral Palsy Associations of New York State and all people with disabilities and their families for a lifetime of hard work, advocacy and leadership that has helped make New York a leader in the field of providing supports and services for people with disabilities and their families.

Speakers, including political figures, members of the Board of Directors of QCP and CP of NYS, past and present executive directors from other agencies and friends, told stories and lauded the accomplishments of a woman who has spent most of her adult life working to create opportunities for people with developmental disabilities.

Natalie organized a group of concerned parents of children with cerebral palsy in 1952 and opened a children’s center in Queens that was the beginning of QCP. The Queens organization grew quickly and joined CP of NYS. Natalie was elected to the CP of NYS Board of Directors in 1953 and remains a member of the board today.

Many from Affiliates across the state know Natalie for her satirical songs performed each year at the CP of NYS Annual Conference. A highlight of her special evening happened when her chorus came together at the event to serenade Natalie with a song written by ADAPT Community Network Executive Director Ed Matthews. 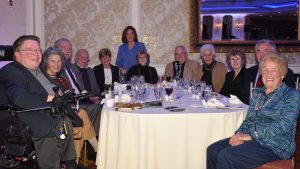 John Kemp (third from left) and Natalie Rogers (far right) pose with members of the CP of NYS Board of Directors and staff who travelled from all over the state to attend the event. (Photo by Lorraine Heaney) 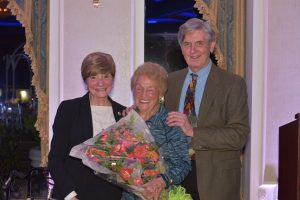 Susan Constantino and Charlie Houston (former executive director of Queens Centers for Progress) served as co-Emcees of the event.   (Photo by Lorraine Heaney) 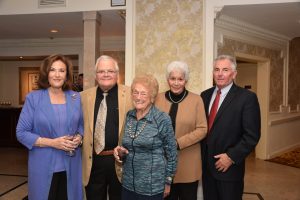 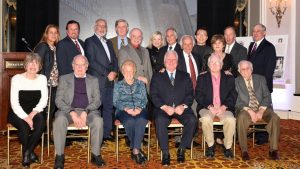 Natalie with Board and staff from QCP  (Photo by Lorraine Heaney)

The New York State ELKS Association recently distributed $25,000 in grants for special projects to about a dozen non-profit agencies, including several CP of NYS Affiliates.

CP of NYS Affiliate Queens Centers for Progress is one of the agencies to receive grant funding in 2017. “We are delighted that we will be able to purchase much needed gym equipment for our students with severe physical disabilities,” said Nancy Glass, QCP’s Director of Children’s Services. “Queens CP is so pleased to have the support of the ELKS for our Home Service Program and this grant is an extra bonus to benefit the students we serve.”

The NYS ELKS Association donates nearly $500,000 each year to support the CP of NYS Home Service Program in all 24 Affiliates across the state. These additional grants allow Affiliates to fund other programs or special projects that might not happen without the additional generous support of the NYSEA.

CP of NYS Affiliate AccessCNY was recently awarded a $2,000 grant from The Million Dollar Round Table (MDRT) Foundation to support services for veterans with mental health issues. The grant will fund AccessCNY’s House to Home program and expand housing supports to retired service men and women.

AccessCNY assists veterans with mental health issues locate affordable and safe housing, providing veterans stability in their lives. At present, the program is only able to provide a roof over the veteran’s head. Funding from the MDRT Foundation will help make the house more comfortable and livable by providing essentials like beds, tables and chairs, kitchen items and other home staples.

Realizing the gains that many people with autism have achieved using the iPad, the Allison Keller Education Technology Program was created in honor of Flutie Foundation Board Member Kevin Lane Keller’s daughter Allison. The goal of the program is to help fill the financial and technological gap for schools and organizations that assist individuals with autism. Since 2012, the Flutie Foundation has granted over $320,000 to 69 schools and organizations for programs specifically serving individuals with autism that have an established technology program in place or have expressed an interest in starting a program using the iPad or other technology tools.

Applications will be considered for any technology tools and/or training that improves learning outcomes or performance. Maximum request is $5,000.00.

Applications open in December.  For more information and to apply, visit:  http://www.flutiefoundation.org/allison-keller-education-technology-program.